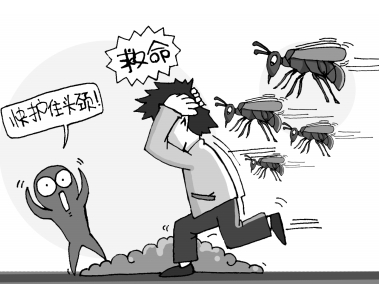 Being attacked by killer bees usually only happens in movies or nightmares. For a couple in Texas, the nightmare turned into reality on Wednesday night. Kristen Beauregard, 44, and her boyfriend were in their garden looking after their two horses. Ms Beauregard told reporters that everything was normal until one of the horses started kicking and jumping. The animal was very frightened about something. Suddenly she saw a dark cloud in the sky and she realized it was a large group of bees. She said: “It got all dark, like it was night time, there were so many bees.” The bees attacked the couple and their horses.

Luckily they had a swimming pool, so the couple jumped in. Ms Beauregard was stung over 200 times by the bees. Her boyfriend counted over 50 stings on his arms, neck and head. The pool probably saved their lives because the bees could not attack them under the water. Kristen said:  “We were trying to stand up in the water but every time we lifted our heads out for air, they would cover us and start stinging us. We were trying to breathe and they were stinging us on the face and on the nose.” Unluckily, the two horses could not escape from the bees. They got stung thousands of times. One died on the farm, the other passed away at the vet's clinic later that evening.