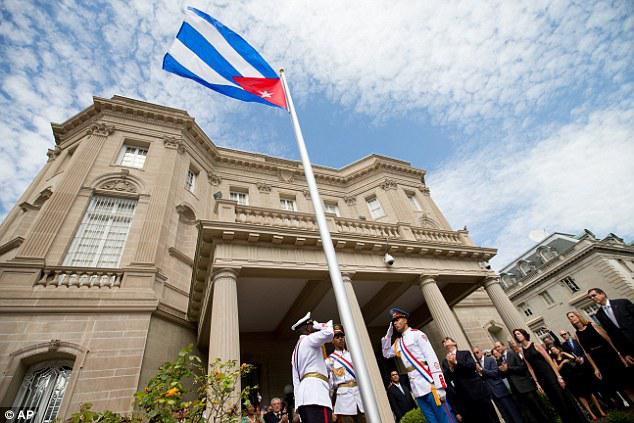 The United States and Cuba have restored full diplomatic ties after sweeping aside more than five decades of tense relations.

A Cuban flag was raised in the lobby of the State Department in Washington in the early hours of Monday, marking a new era of relations between the two nations. Following that historical occasion, Cuban officials formally inaugurated their Washington embassy by raising their national flag for the first time in 54 years. The U.S. Embassy in Cuba has also opened, but the American flag won’t be raised in Havana until Secretary of State John Kerry visits next month.

More than 500 people, including Obama administration officials, U.S. lawmakers and a large visiting Cuban delegation, attended the ceremony at the nearly century-old building that was being transformed into the Cuban Embassy.

Although normalization has taken center-stage in the US-Cuba relationship, there remains a deep ideological gulf between the nations, and many issues still to work out. Among them are complicated disputes such as over mutual claims for economic reparations, Havana’s insistence on the end of the 53-year-old trade embargo and U.S. calls for Cuba to improve on human rights and democracy. Some U.S.lawmakers, including several prominent Republican presidential candidates, have vowed not to end up the embargo and planned to stop Obama’s moves on Cuba.

But Monday’s events caps a remarkable change of course in U.S. policy toward the communist island under President Barack Obama, who had sought diplomatic restoration with Cuba since he first took office and has progressively loosened restrictions on travel and financial support to the island.

“It’s a historic moment,” said Cuban diplomat and analyst Carlos Alzugaray. “The significance of opening the embassies is that trust and respect that you can see, both sides treating the other with trust and respect,” he said. “That doesn’t mean there aren’t going to be conflicts — there are bound to be conflicts — but the way that you treat the conflict has completely changed.”