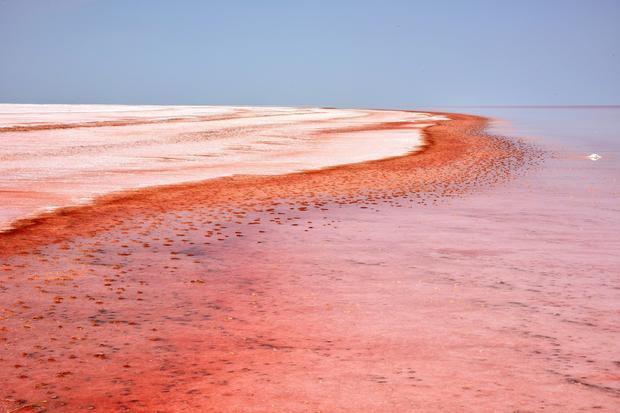 Part of Tuz Golu, also known as the "Salt Lake" in Aksaray, Turkey, turns bright red due to a higher population of algae（海藻）.

Imagine that you're heading out to the beach on a beautiful summer day. The sun is shining. The sand feels warm and inviting on your bare feet. The water is as red as the blood in your veins.

If you find yourself in such a setting, don't panic. You're probably just vacationing in Aksaray, Turkey, where the country's second-largest lake, Tuz Golu, also known by the locals as "Salt Lake," turns bright red due to an interesting anomaly that occurs every summer.

Christopher Gobler, a research professor in a university, New York, told that a species of algae called Dunaliella salinas is responsible for the lake's red color.

Gobler says that when the water is sucked out of the lake due to evaporation, it raises the salt level and kills off a large portion of the plankton（浮游生物）that eat the color-changing algae in the lake. The algae's population grows and causes the water to change to its bright red color.

The lake will retain its strange color until all of the water evaporates sometime in August, leaving behind a dry salt pan. The lake will then fill up with water again during the winter.

Tuz Golu isn't the only body of water in the world with an unusual color, Laguna Colorada in Uyuni, Bolivia, has a lake that turns red in the summer in a similar cycle to Tuz Golu. Lake Hillier located in western Australia has waters that are bright pink.