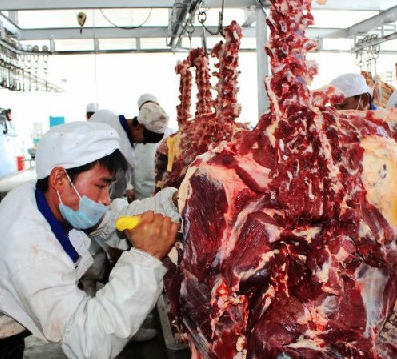 A new study says beef production damages the environment about ten times more than pork, lamb, or chicken production. Scientists said cows need 28 times more land and 11 times more water than pigs, sheep or chickens. They also produce a lot of greenhouse gas after they eat. Food like potatoes, wheat, and rice need 160 times less land and produce 11 times less greenhouse gases than beef. The scientists said the farming of animals and crops is a big cause of global warming. Farming causes 15% of all greenhouse gases. About half of this is from animals.

One scientist said we could reduce greenhouse gas by eating less beef. Professor Mark Sutton said cutting down on beef is better for the environment than using the car less. He also said eating less beef means we could give the wheat that cows eat to feed hungry people. This sounds simple, but many governments do not want to try it. Professor Sutton said governments should think about this carefully. He said consumers also needed to think more about what they eat. He said that eating less meat, especially less beef, is good for the environment.