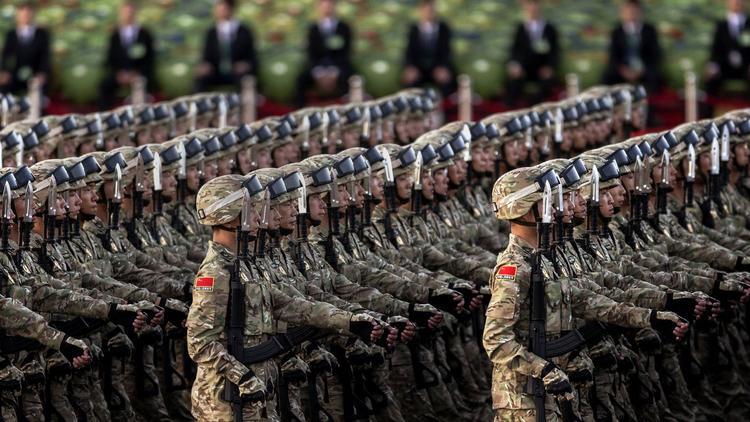 President Xi Jinping announced Thursday that China will cut its military by 300,000 troops, a significant reduction in one of the largest militaries in the world and a move that the Chinese leader called a gesture of peace.

"The great renewal of the Chinese nation requires the dedicated efforts of one generation after another," Xi said in a speech at Tiananmen Square commemorating the 70th anniversary of the end of World War II in the Pacific. "Having created a splendid civilization of over 5,000 years, the Chinese civilization will lead to an even brighter future," he said.

Xi's speech kicked off the parade. An estimated 12,000 troops – about 1,000 of whom hailed(致敬) from Belarus, Cuba, Tajikistan, and other countries – marched along the 10-lane Changan Avenue from the commercial center Wangfujing to Tiananmen Square, about 1.5 miles away. They were joined by 200 fighter jets and 500 pieces of military hardware, including tanks and ballistic missiles.

Rory Medcalf, head of the national security college at Australian National University, said that Beijing may have decided to cut 300,000 troops "in the name of efficiency and cost saving so that the defense budget can be reallocated to 21st century capabilities."

Xi conducted a “troop inspection” after his speech, riding down Changan Avenue in a Chinese-manufactured Hongqi parade car.

On Thursday morning, China’s popular microblogging site Sina Weibo filled up with 350 million comments related to the parade. While many users expressed their patriotism and pride, few posts were filled with criticism. “The soldiers are too serious,” wrote one user. Others complained about the cloud of gray exhaust that followed a column of tanks.