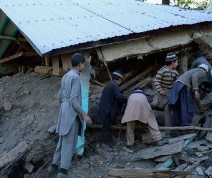 There was an earthquake around the Hindu Kush mountain(兴都库什山脉) this week. The earthquake went to Afghanistan(阿富汗), Pakistan, India and Tajikistan(塔吉克斯坦).

Over 100 people died from the earthquake in Afghanistan, and the number of the dead is still going up. In a school in Afghanistan, students were having classes when the earthquake began. Then all the students ran out of the classrooms to the open air. They were so frightened that they were crying and pushing others in the running. Many students fell to the ground and could not stand up, because others were all running on their bodies. At least 12 girls died under others’ feet in the running.