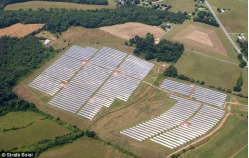 A North Carolina town has rejected a plan for a new solar farm after debates where two residents said that it would suck up all the sun and cause cancer.

Woodland was considering zoning changes that would have allowed Strata to build a farm near an electrical substation(变电所）, but ended up deciding against the measures at a town council meeting earlier this month.

One man opposing the project said that the project would kill plants in the town because it would “suck up all the energy from the sun and businesses would not come to Woodland”. Some opposed the solar farm because they believed it would reduce property values and that the town is not getting any profit while Strata and the electrical company do.

However, two residents drew international attention after making questionable scientific claims about the renewable energy source’s impact. Jane Mann, a retired science teacher, said that she was worried that photosynthesis(光合作用) would not happen because of the solar panel and had seen areas near other farms turn brown. One company is already placing solar panels near Woodland’s electrical substation, which is what makes the area attractive for the facilities. She also mentioned a number of cancer cases nearby saying that “no one could tell her that solar panels didn’t cause cancer”. Bobby Mann said that solar farms had made other towns in the area “dry up” and said the farms sucked away all the sun.

Strata Solar Company representative Brent Niemann was also at the meeting and denied the claims and explained that solar panels only use the sunlight that hits them directly. He also said that there were no harmful materials at the site and another rep said that there had been no negative effects on property values in other parts of the state.

After rejecting the zoning changes by a vote of 3-1, the town placed a suspension on all future solar farms.