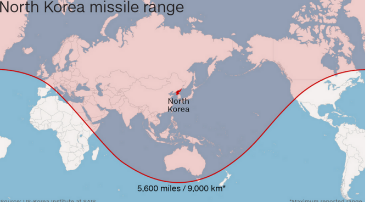 North Korea bragged(吹牛）) on Wednesday about the “spectacular success” of its first hydrogen(氢) bomb test, a challenging act that leader Kim Jong Un, in a statement read on state television, said would “make the world ... look up to our strong nuclear country.”

Outside the hermit kingdom, however, Pyongyang’s(平壤的) hydrogen bomb claims are being treated with doubt. White House spokesman Josh Earnest said, “The initial analysis is not consistent with the North Korean claims.” Wednesday’s test yielded a blast of a similar magnitude(震级) to a previous North Korean test in 2013, according to Martin Navias, a military expert at King’s College London.

“We won’t know for another few days or weeks whether this was a hydrogen bomb,” he said. “It doesn’t look like one; ... one would have expected the power to be greater if it was an H-bomb.”

One analyst in Seoul cast doubt on whether enough material could be collected to ever find out definitively what Pyongyang has tested. “After the third nuclear test by North Korea in 2013, we couldn’t find any radionuclides(放射性核素) ... it means they can shield the test facilities very well,” says Jiyoung Park, a senior research fellow at the Asan Institute for Policy Studies.

Doubts from international experts about North Korea’s claim to have conducted its first H-bomb test aren’t dampening spirits in Pyongyang. In the North Korean capital, where CNN is the only U.S. broadcaster operating, officials say the announcement has triggered an outpouring of national pride. North Korean officials plan to take CNN’s crew to a science center, where people close to the project will explain the science behind it.