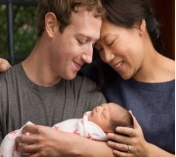 Facebook’s Mark Zuckerberg and his wife Priscilla Chan say they will give away 99% of their shares in the company to good causes as they announce the birth of their daughter Max.

Mr Zuckerberg said in a letter to Max on his Facebook page. He said they will donate their fortune to the Chan Zuckerberg Initiative(“扎克伯格—陈计划”基金会) because they want to make the world a better place for Max to grow up in. Max was born last week, but the couple only made the news of her birth public on Tuesday.

Billionaire Warren Buffet congratulated Zuckerberg and Chan, saying that when it comes to giving away your fortune, "30 is the new 70".

"Many of the greatest times for your generation will come from giving everyone the way to the internet," Mr Zuckerberg wrote to his daughter. Mr Zuckerberg said he will still be CEO of Facebook for "many, many years to come," and Facebook said he is expected to be the controlling stockholder of the company.