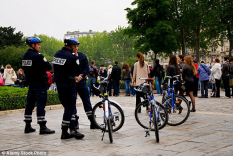 Most European pickpockets work in groups and use distraction methods to rob unsuspecting tourists at popular attractions. Chief marketing officer for TripAdvisor Christine Peterson said, “Not always a basic 'lift-and-run' operation, expert pickpocketing can sometimes involve more complicated tricks. Travelers need to be aware of all kinds of tricks meant to distract them from their belongings while enjoying popular world attractions.”

Here are some European cities that according to TripAdvisor are places to be especially aware of conniving pickpockets.
Barcelona
With its stunning Catalan architecture and perfect coastline, it is no wonder Barcelona is one of Europe’s top tourist destinations. But more than 300 thefts are reported every day in this spectacular city, earning itself the reputation as the pickpocket capital of the world.
You can become a victim anywhere in Barcelona, but thieves particularly target Cathedral Square, Las Ramblas, Plaza Catalunya and Plaza Real.
Paris
Paris is one of the world’s most visited cities, but the tourist attractions which make the “city of love” famous are teeming with pickpockets.
The Eiffel Tower was closed for a day last year after staff went on strike demanding help to deal with thieves operating around the landmark. The Louvre, the world’s most visited museum, was closed in 2013 also because of strikes related to pickpockets targeting tourists and employees.
Madrid
As a Spanish city famous for tourism, Madrid is home to the infamous ‘Bosnian clan’.
Four women who form the notorious pickpocket gang made a name for themselves in Barcelona—where they robbed thousands of tourists and Metro users—before moving on to Madrid.
In 2013 the gang was banned from all of Madrid’s underground network, before the ban was overturned on a legal technicality. Pickpocketing on the Madrid Metro dropped by 40 per cent while the restraining order was in place.

The Metro, the Plaza Mayor and Cibeles Square are prime target areas for Madrid’s thieves.