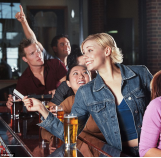 New research has confirmed what people who like a few drinks have always known: living near a pub makes you happier. Oxford University researchers found that regulars with a local pub nearby are “significantly” happier, have more friends, better life satisfaction, and actually drink in more moderation.
The report highlighted the importance of face-to-face interaction, and noted that people were more likely to be engaged in conversations in small community pubs rather than larger places. It also found social skills improved after a drink.
Professor Robin Dunbar, of Oxford University, said: “Friendship and community are probably the two most important factors influencing our health and wellbeing. Making and maintaining friendships, however, is something that has to be done face-to-face. The digital world is simply no substitute. Given the increasing tendency for our social life to be online rather than face-to-face, having relaxed accessible venues where people can meet old friends and make new ones becomes ever more necessary.”
Tim Page, chief executive of Camra, said: “Pubs offer a social environment to enjoy a drink with friends in a responsible, supervised community setting. Nothing is more significant for individuals, the social groupings to which they belong and the country as a whole as our personal and collective wellbeing. The role of community pubs in ensuring that wellbeing cannot be overstated. For that reason, we all need to do what we can to ensure that everyone has a ‘local’ near to where they live or work.”
The report said pubs have played a key role in British social life since the 16th century. “Pubs came to represent the heart and soul of a community, providing both a place of entertainment and an engine for community bonding,” it says.
However, it notes that the pub is in decline: in 1951, there were 73,421 pubs in England and Wales, but by 2014 the number of pubs had declined to 51,904, with pubs continuing to close at an average rate of 29 a week.
本时文内容由奇速英语国际教育研究院原创编写，禁止复制和任何商业用途，版权所有，侵权必究！
请先登录
最新评论
点击显示
本文翻译请先完成本篇阅读