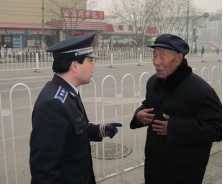 A 73-year-old man couldn’t find his way home in the Forbidden City. After some days, people found him in Tianjin. It’s about 100 km from Beijing. Grandpa Yu was trying to walk back to his home 2,000 km away from Rui'an, east China's Zhejiang, but he made the wrong way and walked to Tianjin. A stranger found him walking in Tianjin and brought him to a police station.
Grandpa Yu was with some other old people in the Forbidden City. He couldn’t find his friends after a while. He then asked some people around him for help, but they could not understand his words. Without a phone or phone numbers for his children, Yu decided to walk home. Some people joked that Beijing’s smog made Grandpa Yu get lost. "I will never travel again," Yu told the newspaper.
本时文内容由奇速英语国际教育研究院原创编写，禁止复制和任何商业用途，版权所有，侵权必究！
请先登录
最新评论
点击显示
本文翻译请先完成本篇阅读