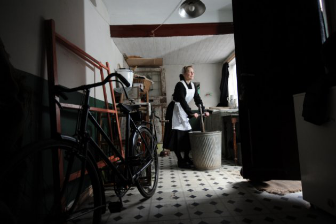 For the past few years, Joanne Frances has been living life as if the Second World War has just broken out. The 41-year-old lady has no computer, washing machine, television or car but to ride an 80-year-old pedal bike to work.
The woman, who works as a cleaner, has a lifestyle of the 1940s. She ditches the central heating for coal fires and uses an outside toilet.
But one thing is missing from her life—a wartime husband. “I would like to meet someone,” she said. “I’ve had a few boyfriends, but I know most people find me quite hard to live with. But I haven’t entirely given up hope. I mean, I still like to think that I am a pretty good girl. I would have their tea on their table when they came home from work. I’d do their washing and ironing(熨烫). In fact, I’d take care of everything.” The only problem is that most people who want that kind of housewife are either in their 90s.
“I think the neighbors realized I was serious when I cleaned out the kitchen and bathroom as soon as I moved in. But I still have a good social life and enjoy a beer or a glass of whiskey,” she told website Survivor 79.
本时文内容由奇速英语国际教育研究院原创编写，禁止复制和任何商业用途，版权所有，侵权必究！
请先登录
最新评论
点击显示
本文翻译请先完成本篇阅读