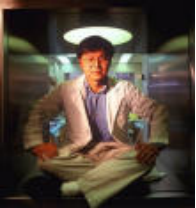 David Ho is a great scientist. He was born on November 2nd, 1952. As a boy, he lived in Taichung, Taiwan. When he was only four, his father left for America to search a better life for them. For nine years, he could only communicate with his father through mails. After nine years, his father finally sent for the family to come to America. When they arrived in the United States, they lived in Los Angeles. At school, he did not know any English.
David Ho is best known for his AIDS research. He realized that physics wasn’t the hottest thing in science any more. David discovered a way to treat AIDS. He used a method of treating AIDS with “cocktails”.
This man is a hero because he never gives up. He was brave because he had to immigrate to a new land, where he did not know the language and anyone. He did not give up when people laughed at him about not knowing English. He makes a difference in our life because he teaches us never to give in to anyone. He teaches everyone that no matter what religion or what culture you are, you can do something just as well as anyone else, as long as you try.
本时文内容由奇速英语国际教育研究院原创编写，禁止复制和任何商业用途，版权所有，侵权必究！
请先登录
最新评论
点击显示
本文翻译请先完成本篇阅读