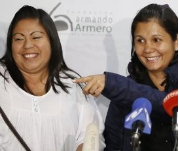 It has been 30 years since two sisters in Colombia met each other. Jaqueline and Lorena Sanchez thought they had lost each other forever in 1985 when the Tolima volcano erupted near their town of Armero. The hot things from the volcano heated nearby iceberg, this made four terrible mudslides happen. These killed more than 20,000 of Armero's 29,000 people. Jaqueline, 33, and Lorena, 39, never found each other after that. They each thought the other was among the dead in the mudslides. Tolima was the second most deadly eruption of the 20th century. Only the 1902 eruption of Mount Pelee in the Caribbean was deadlier.
The two sisters went to different families and never knew each other. They have both spent much of their time looking for each other. They were together again when they gave their DNA to an organization. The organization helps people find their families all over the world. Lorena said, “It was beautiful and sad because it has been 30 years since the accident happened, and I’ve come to find out what happened to my sister. I have to catch up with 30 years of her life and she has to do the same with me.” Jaqueline said, “I’m excited, worried, everything because suddenly, you don’t know if you are welcomed. I don’t know if she will love me. It's difficult. It’s difficult to explain this moment.”
本时文内容由奇速英语国际教育研究院原创编写，禁止复制和任何商业用途，版权所有，侵权必究！
请先登录
最新评论
点击显示
本文翻译请先完成本篇阅读