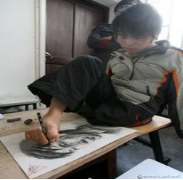 A little boy thought he was one of the most unlucky boys in the world, because he had the disease and became a disabled(残废的) man. He seldom played with his classmates and always kept to himself. Quite often he lowered his head when his teachers asked him questions.
One spring, his father got some young trees from his neighbor and asked each of his children to plant one in the yard. “I’ll give a gift to the one whose tree grows the best,” he said.
The little boy wanted to get the gift, so he was very glad to do it and watered the tree every day. But he felt ashamed of himself again when he saw his brother and sister jumping and dancing happily while watering.    3   Then an idea occurred to him that if he stopped watering it, the young tree will die earlier. Then he didn’t have to take care of it any more.
A few days later, when he went to see the young tree, to his surprise, compared with(与……相比较) other young trees, his tree grew better. Later he knew his father helped him get the gift.
From then on, the little boy became more optimistic and spent more time talking and playing with others. He wasn’t lonely any more.
本时文内容由奇速英语国际教育研究院原创编写，禁止复制和任何商业用途，版权所有，侵权必究！
请先登录
最新评论
点击显示
本文翻译请先完成本篇阅读