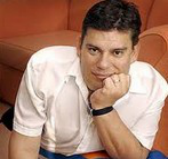 John Coutis, a man without lower part of his body walking with hands, is well-known all over the world as a great lecturer as well as a master to encourage people around the world. His speech is full of excitement and encouragement. He was born disabled and he was told to be dying the next day. But this tough life has lasted 36 years till now.
John Coutis began to learn cricket indoors, weight lifting and American football. With his hard work and strong determination he began to win lots of honors. He won the first place in a disabled tennis competition in Australia. After his graduation from high school, he had tried many times to look for a job, but failed. He got his first job until he met a boss of a grocer. Since then he has worked hard. Later he became a salesman and then a technician. A speech he made by chance changed his life. Once he was invited to introduce his special experience. All the people present were moved by his speech. He realized that he could help more people by encouraging them to be independent.
Remember a saying given by Coutis: Everyone has his or her own disabled parts. You can see my disabled part, but can you see yours?
本时文内容由奇速英语国际教育研究院原创编写，禁止复制和任何商业用途，版权所有，侵权必究！
请先登录
最新评论
点击显示
本文翻译请先完成本篇阅读