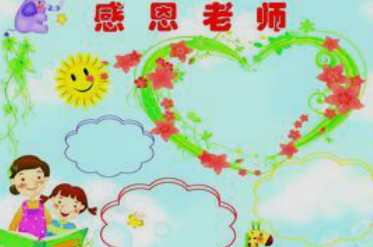 Thanksgiving Day was near. The first grade teacher gave her class an interesting task—to draw a picture of something for which they were thankful.
Most of the class might be considered economically disadvantaged, but still many would celebrate the holiday with turkey, corn and pumpkins and other traditional goodies(好东西) of the season, like all of those symbols drawn on holiday decorations and greeting cards. These, the teacher thought, would be the subjects of most of her students’ art. And they were.
But Douglas made a different kind of picture. Douglas was a different kind of boy. As other children played during break, Douglas was likely to stand close by her side. One could only guess at the pain Douglas felt behind those sad eyes.
Yes, his picture was different. When asked to draw a picture of something for which he was thankful, he drew a hand. Nothing else. Just an empty hand.
His abstract picture caught the imagination of his classmates. Whose hand could it be? One child guessed it was the hand of a farmer, because farmers raise turkeys. Another suggested a police officer, because the police protect and care for people. And so the discussion went—until the teacher almost forgot the young artist himself.
When the children had gone on to other pictures, she paused at Douglas’ desk, bent down, and asked him whose hand it was. The little boy looked away and murmured（小声说）, “It’s yours, teacher.”
She recalled the times she had taken his hand and walked with him here or there, as she had the other students. How often had she said, “Take my hand, Douglas, we’ll go outside.” Or, “Let me show you how to hold your pencil.” Or, “Let’s do this together.” Douglas was most thankful for his teacher’s hand.
The story speaks of more than thankfulness. It says something about teachers teaching and parents parenting and friends showing friendship, and how much it means to the Douglases of the world. They might not always say thanks. But they’ll remember the hand that reaches out.
本时文内容由奇速英语国际教育研究院原创编写，禁止复制和任何商业用途，版权所有，侵权必究！
请先登录
最新评论
点击显示
本文翻译请先完成本篇阅读