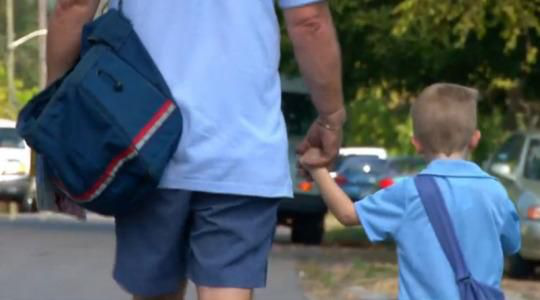 Neither rain nor snow nor gloom of night can separate Tennessee postal carrier Mailman Mike from his 4-and-a-half- year- old friend Carter Lawson — or keep them from their appointed rounds.
For the past nine months, the two have teamed up every day in the preschooler’s Knoxville neighborhood for a few minutes of delivering mail together and chatting with fellow residents. Lawson wants to be a mail carrier when he grows up, and in an inspiring story, his mom said how the veteran mailman, Mike Crenshaw, has been a role model to her son. “Anyone could just be like ‘Go away, kid,’ but Mike has really gone out of his way to talk with Carter,” said Cassie Lawson of the United States Postal Service carrier. “It’s been really cute.” Little Carter even got his own outfit to match Mike’s. “I just couldn’t believe he got a full mailman’s costume,” the boy’s mother said happily.
"Every letter carrier has stops he looks forward to and this is the one I look forward to every day,” said Mike. “He’s the end of my day, and the best part of my day, not just because it’s the end, but because he’s such a cute little guy.”
The man and the little boy’s connection isn’t a surprise to Fredric Rolando, president of the National Association of Letter Carriers. Kids respond to mailmen because “letter carriers are a friendly part of the neighborhood who bring something to their house every day and are someone they come to recognize and trust,” Rolando said. “It’s the same for the elderly, but in addition, letter carriers may be the only person they communicate with all day.”
本时文内容由奇速英语国际教育研究院原创编写，禁止复制和任何商业用途，版权所有，侵权必究！
请先登录
最新评论
点击显示
本文翻译请先完成本篇阅读