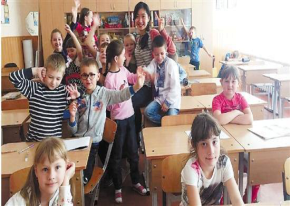 Victor is a volunteer. A volunteer works in a charity but does not get money. Victor works in a charity. He wants to help people. He wants to help old people. He helps twice a week. He goes to old people’s home. He takes old people out for a walk. He cooks for them. He helps them eat. He helps them buy things in shops.
One day he meets his friend Kevin. Kevin doesn’t know Victor is a volunteer. Victor tells Kevin he helps people in old people’s home. He is very surprised. Kevin thinks it is a very difficult job. Kevin asks Victor why he does it. Victor says he just wants to help and to have an interesting life. Kevin asks Victor how much money he gets for his help. Victor says he does not get any money. He is a volunteer. Kevin thinks Victor is a good man. Kevin says he would also like to help but he doesn’t have time. Victor tells Kevin he can help with money. Kevin has money but he doesn’t have time. Kevin wants to help like Victor. Victor helps with his hands and has an interesting life and a good feeling. Kevin helps with money and he has a good feeling. Kevin finds the bank account number of the charity on the Internet and sends them some money. He has a good feeling.
本时文内容由奇速英语国际教育研究院原创编写，禁止复制和任何商业用途，版权所有，侵权必究！
请先登录
最新评论
点击显示
本文翻译请先完成本篇阅读