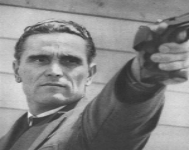 Charles is a sportsman. He knows how to win. He shoots from pistols(手枪). He is the best in his country. He is 26. He is a world-class pistol shooter. There are Olympic games. He mustn’t shoot for his country. He is sorry but he trains hard. He has a job in the army. He trains for the next Olympics. Charles trains hard. One day he has an accident. He cannot use his right hand. He tries his left hand. He keeps training.
One year before the Olympics he goes to a shooting cup. Other sportsmen think he comes to watch. He tells them he is not here to watch. He is here to shoot and win. He wins. Next year there are no Olympic games. There is a war in Europe. Charles keeps training. He goes to the next Olympic games. He is the first. He is happy. He keeps training. In four years he wins again at the Olympics. He is a great sportsman.
本时文内容由奇速英语国际教育研究院原创编写，禁止复制和任何商业用途，版权所有，侵权必究！
请先登录
最新评论
点击显示
本文翻译请先完成本篇阅读