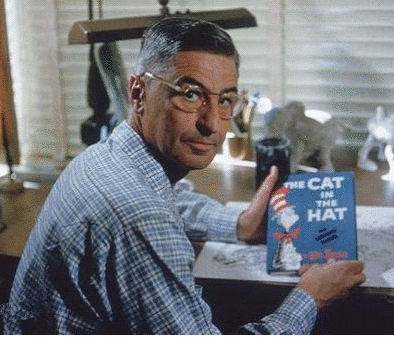 Theodor Seuss Geisel was born on March 2, 1904 in Springfield, Massachusetts. He entered Springfield Central High School in 1917 and graduated in 1921. While still being a freshman in Dartmouth College, Dr. Seuss joined the Dartmouth Jack-o-Lantern, which was the humor magazine. However, he was caught by the school administration while throwing a drinking party for his friends. This was during the time of Prohibition, and thus, the school wanted him to resign from his extracurricular activities. So, he began to sign his work with the pen name Seuss and continued to work with the Dartmouth Jack-o-Lantern without the knowledge of the administration.
He then entered Lincoln College in Oxford to study for a PhD in literature. In 1936, while returning from Europe in an ocean voyage, the ship's rhythm inspired him to write his first poem, which also became his first book, titled And To Think That I Saw It On Mulberry Street. According to the records, it was rejected by around 20 to 40 publishers, and he was going home to burn the manuscript when he met an old classmate of Dartmouth, who led him to its publication Vanguard Press. He wrote four more books before World War II. When World War II started, he began to draw political cartoons for the New York newspaper PM. He joined the army in 1943 and worked as the commander of the Animation Department of the First Motion Picture Unit of the United States Army Air Forces, where he wrote many films.
After the war, Dr. Seuss and his wife moved to La Jolla, California. He began writing children's books. The favorites among those were If I Ran The Zoo in 1950, Scrambled Eggs Super! in 1953 and On Beyond Zebra in 1955. And in 1956, he was awarded with an honorary doctorate. Then he won a special Pulitzer Prize in 1984 for his contribution to the education of the children of America for over half a century. On September 24, 1991, following many years of illness, Dr. Seuss passed away.
本时文内容由奇速英语国际教育研究院原创编写，禁止复制和任何商业用途，版权所有，侵权必究！
请先登录
最新评论
点击显示
本文翻译请先完成本篇阅读