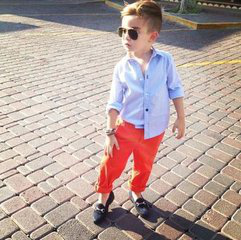 A mother in Houma, Louisiana, was horrified when she learned that her 5-year-old son did not get off his school bus on Monday afternoon. Her son Kenneth was later found walking on the side of the road by police, according to local reports.
“I got an empty pit in my stomach because at that moment I didn’t know where my child was and I was scared.” Hotard said her son refused to take the bus because his classmates at Legion Park Elementary had been bullying(欺凌) him.
“Because every week they throw spitballs, and they land on my ear,” Kenneth said when asked why he didn’t get on the bus. And on Monday, Hotard said he told a teacher that he had been given permission to walk home.
Kenneth was found about a half mile from his school after someone reported that he was walking down the road alone. When police found him, he was walking home in the wrong direction(方向).
Hotard added that her son, who has not returned to school, told her, “I’m ready to go to another school.” “I don’t want any other parent to ever have to feel what I felt,” she said. “I don’t want any other child to be on a side of a road by themselves scared. I think things have to change.”
本时文内容由奇速英语国际教育研究院原创编写，禁止复制和任何商业用途，版权所有，侵权必究！
请先登录
最新评论
点击显示
本文翻译请先完成本篇阅读