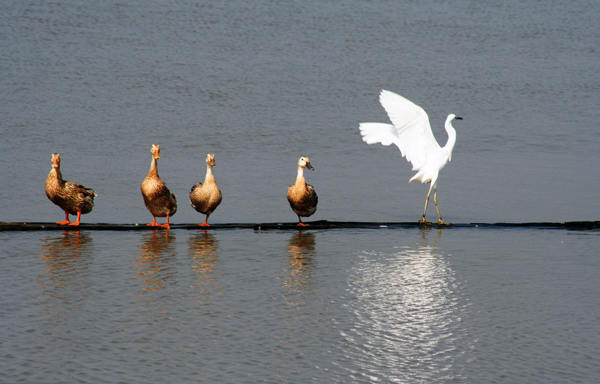 To pollute a river requires only one flush of waste water from homes or factories, but the recovery process can take dozens of years.
Mr Chen grew up near Donghu Lake, a waste water basin in the Changle District of Fuzhou. He said, “The water in the lake was very clear with fish living in it when I was a little kid. The water could even be used for drinking. But in the following years, the water quality gradually went bad because of cattle waste, village garbage and illegal discharging in the lake. The clear water turned dark and smelly. Water plants on the lake once covered more than half the surface and eventually the water couldn’t be used for farmland watering anymore."
Since 2013, the local government has given 420 million yuan ($60.6 million) to repair the lake. “We shut down 250 cattle farms surrounding the basin, laid 13.3 kilometers of wastewater-collecting pipes connecting 120 factories and dug 5.33 km of waterways,” said Wang Jianbo, press spokesman at the Fuzhou Environmental Protection Department. “We dug streams to the lake, built slopes at the banks and built greenbelts in the upper reaches of the basin. There is also a pump station close to the lake used for pumping waste water to a nearby waste dealing factory.”
“Finally, Donghu Lake has returned to what it looked like 30 years ago,” Chen said. After two years, the recovery project was completed and the water quality has improved. Many kinds of plants grow along the water’s edge. As a result of the improvement, Donghu Lake hosted a national kayaking(皮划艇) competition in October 2015.
本时文内容由奇速英语国际教育研究院原创编写，未经书面授权，禁止复制和任何商业用途，版权所有，侵权必究！（合作联系：028-84400718  QQ：757722345）
请先登录
最新评论
点击显示
本文翻译请先完成本篇阅读