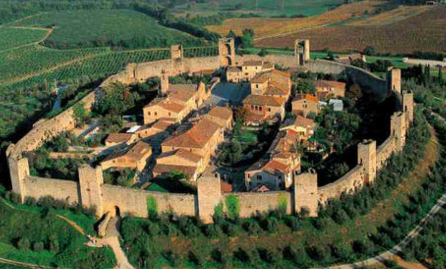 The Castle of Monteriggioni
Located in central Tuscany, the Castle of Monteriggioni was built by the Republic of Siena at the beginning of the 13th century in order to defend its southern border against Florence. With their impressive towers, they feature in Dante’s Divine Comedy.
Main Sights
Inside the town are the Church of Santa Maria Assunta, the battlements on the town walls and the small “Monteriggioni in Arme” museum, where there are models and life-size armors(铠甲).
Every July within the wall of the town a special event is celebrated: the Medieval Festival of Monteriggioni, one of the most beautiful festivals in the region. The city goes back in time to the Middle Ages. The streets are filled up with people in period costume creating a real atmosphere. Dances, live performances, music, theatres, kids entertainment, storytellers and more entertain the public.
The surrounding area
The town lands of Monteriggioni, with the walled town as their capital, cover an area of about 100km² directly to the north of Siena, full of woods, hills, vineyards and olive groves(小树林). The town lands also take in a large area of unspoiled nature that has been declared a Site of Community Importance(SCI). The area is crossed by a network of trails, including the Via Francigena, which can be travelled on foot, bicycle or on horse-back.
How to get to Monteriggioni
BY CAR
Take the “Monteriggioni” exit on the Florence-Siena motorway link.
BY BUS
Line 130 from Siena for Colle di Val d’Elsa-Poggibonsi-SanGimignano.
BY TRAIN
The closest station is “Castellina in Chianti-Monteriggioni”.
Tourist Office
Piazza Roma, 23
53035 Monteriggioni(SI)-Italy
Tel./fax+39 0577 304834
info@Monteriggioniturismo.it