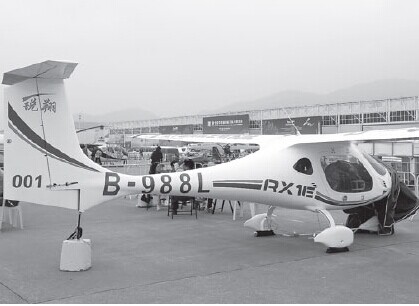 China will soon put its first domestically developed electric aircraft into mass production, and designers expect a huge market at home and abroad.
“This will be the first electric aircraft to be certified by our civil aviation authority. The success of the plane means China has become a technology leader in this filed,” Yang said, who is president of Shenyang Aerospace University in Liaoning province, headed the development of the two-seater, light-duty aircraft. Two prototypes of the plane are at the air show, one of which takes part in a performance each day during the event.
“We plan to reach an annual production of 100 such aircraft within three years.” Yang said, adding that the plane, together with a set of batteries, will sell for nearly 1 million yuan ($163,000).
The convenience of use, easy maintenance, low operating costs and high safety levels will bring the RX1E many buyers to serve a wide range of purposes, such as police patrols, flight training and entertainment, he added.
Yang said he expects that the Chinese market will need at least 1,000 RX1Es to meet the demand from general aviation businesses.
With a maximum takeoff weight of 480 kg and a cruise speed of up to 160 kilometers per hour, the RX1E can fly 90 minutes based on a full charging of its batteries. It is able to carry loads for 230 km and fly at an altitude of nearly 3,000 meters. Each hour of flight will cost only 20 yuan, including 5 yuan for battery charging, according to Song Mingkai, a RX1E designer.
Yang said, “In addition to the domestic market, it also has promising prospects in the European and United States markets, as many foreign enterprises have contacted us to express interest in it.”