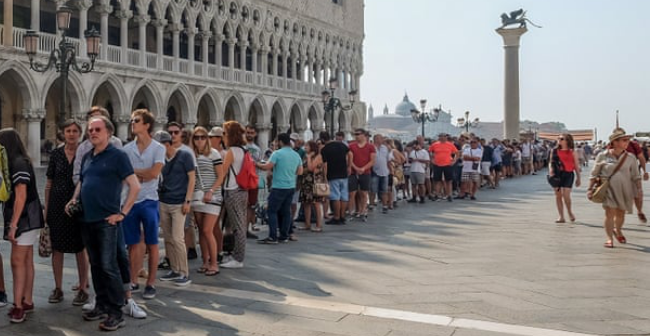 Day-trippers to Venice will be charged up to €10 (£9) to enter the famous city as authorities continue to deal with the tens of millions of tourists who visit every year. The Italian parliament approved the entry tax, which will range from €2.50 to €10 depending on the time of year. A similar system has been applied for Elba island, part of the Tuscan archipelago, and the Aeolian Islands off Sicily.
Luigi Brugnaro, the mayor of Venice, said the money collected would help do with the rubbish that day-trippers leave behind. It is unclear when the tax will be introduced or how it will be applied. Reports in the Italian press suggest it could be added to the cost of arriving in the city either by train, bus or ships, with the transport companies passing the earnings on to Venice authorities.
Each visitor will be charged a minimum fee of €2.50 throughout the year, rising to between €5 and €10 during peak periods. It will not affect those who have booked hotel rooms. Venice visitors already pay a tourist tax if they spend at least one night in the city. Venice has long struggled to manage a tourism industry that brings in about 30 million visitors a year, many arriving by cruise ship.
Gates were installed during peak periods this year in an attempt to reduce the number of the tourists to St. Mark’s Square and the Rialto Bridge. If the number gets too high, the gates will be closed and only those with hotel bookings or holding a Venezia Unica pass can come in, a card that is mainly used by residents but can be bought for €40 by anyone who uses a water bus. Authorities are also trying to encourage people to visit other lesser-known areas or one of its other islands, such as Murano and Burano.