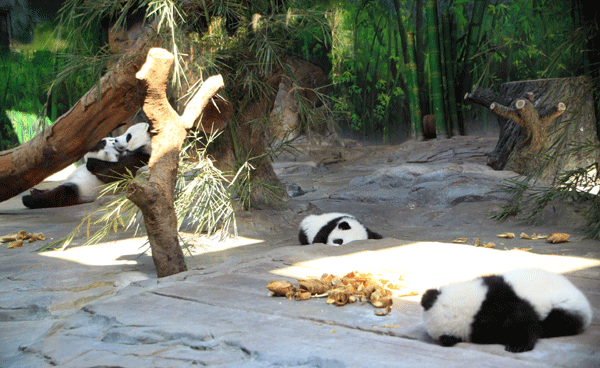 The last of three panda triplets joined its mother, Juxiao, on Dec 9. It’s the first time for the family to get together after the birth of the triplets at a zoo on July 29. Two of the baby pandas have been with their mother since Nov 21. Juxiao walked around the panda center in Guangzhou, gently feeling the three babies, they are the only living panda triplets in the world.

It was the first time that Juxiao had a chance to stay with all three of the triplets since they were born. Gentle care from the mother panda will help the three babies grow in a more healthy way. Juxiao was unable to look after the babies in recent months as she was in poor health after their birth. Workers at the zoo fed the babies in the early days. They later allowed the mother to nurse each baby in turn. On Nov 21, Juxiao began looking after two babies and seemed to be happy to be with them.

It is a little dangerous to allow Juxiao to take care of three babies. We have no experience of allowing a panda to look after three cubs. The cubs have to learn skills from their mother. Each of the three cubs now weighs more than 8 kilograms and they are in healthy condition.