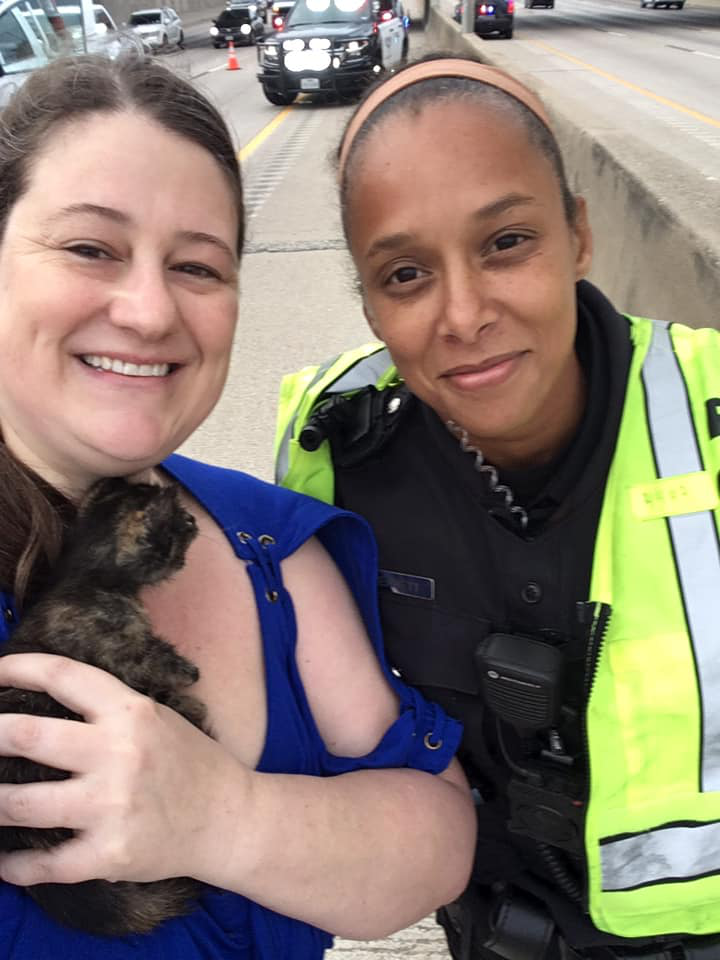 Kristyn Gamblain of Fort Worth, Texas, was on her way to work when she found a tiny ball of fur on the side of the highway. Her first thought was she’d seen a little cat. But how?
The animal lover knew she had to turn around and find out what was going on. So she got off at the next exit and, despite the traffic, went all the way back to the beginning of her journey to retrace her steps until she saw the cat again. That’s when she pulled over and discovered a tiny cat was trapped in a broken Jersey barrier. “This little cat had got itself trapped in the less than 2-inch space between the barriers,” Kristyn wrote. “So I get down on my knees and start trying to take this little cat out, but I can’t get my hands deep enough into the crack, so things are not going well.”
With cars flying by, Kristyn was relieved when highway patrol Officer Bennett arrived to help. After they contacted animal control, more officers came to direct traffic and provide a safe space where they could work on saving the cat. Not long after, Officer Galbraith showed up to help. Since her hands are smaller than Kristyn’s, she had more luck making the poor cat loose.
After another ten minutes, they used Officer Bennett’s tool to break the cement. Finally, they were able to free the little one completely! “Oh happy day!” Kristyn wrote. “We did it!” What an amazing team effort!
本时文内容由奇速英语国际教育研究院原创编写，未经书面授权，禁止复制和任何商业用途，版权所有，侵权必究！（作者投稿及时文阅读定制请联系微信：18980471698）
请先登录
最新评论
点击显示
本文翻译请先完成本篇阅读