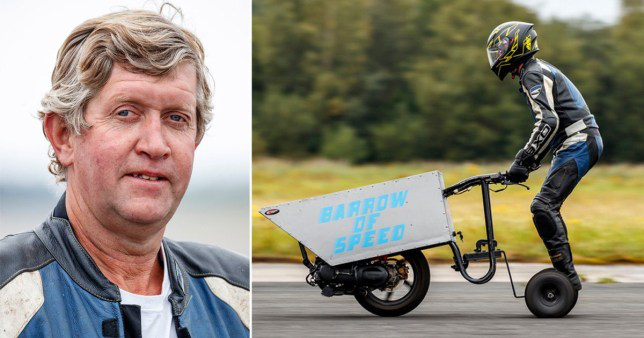 Kevin Nicks, 55, a gardener from Oxfordshire, believes he’s set a new speed record after clocking 44 miles per hour on the back of his wheelbarrow(手推车) earlier today. He’s called it the “Barrow of Speed” and thinks he can go even faster when a Guinness World Records representative comes to verify the result in six weeks time.
His homemade wheelbarrow, which uses a motorbike engine, was competing at a Straightliners event at Elvington Airfield in North Yorkshire. He said, “I’m here with people who do over 200mph on motorbikes and they’ve all said this machine is mad. It’s the most strange thing ever to ride—the handles of the wheelbarrow move in all directions. Every journey on it is not just going fast in a straight line, but you’re trying to avoid crashing, which is great! The rush is unbelievable.”
The speed reaches up to 72 kilometres per hour, which is higher than the base speed he was set by the people at Guinness World Records. But he’ll still have to beat it again to get his name in the famous book for the second time.
“As long as it doesn’t kill me, I’ll have set the Guinness record,” he said. Mr Nicks previously created the world’s fastest shed(小屋) which hit speeds of more than 100mph on a Welsh beach in 2018. He said he started building the super speedy wheelbarrow shortly after the country went into lockdown to inspire others to be creative and distract them from bad news surrounding the Covid-19. “I can’t change the world but what I can do is try to make it better for some people,” he said. “For me, it’s rewarding to see the smiles on people’s faces.” Mr Nicks made a smaller version of the Fastest Shed, called Freddy the Sheddy, for children, and has also published a children’s book.
本时文内容由奇速英语国际教育研究院原创编写，未经书面授权，禁止复制和任何商业用途，版权所有，侵权必究！（作者投稿及时文阅读定制请联系微信：18980471698）
请先登录
最新评论
点击显示
本文翻译请先完成本篇阅读