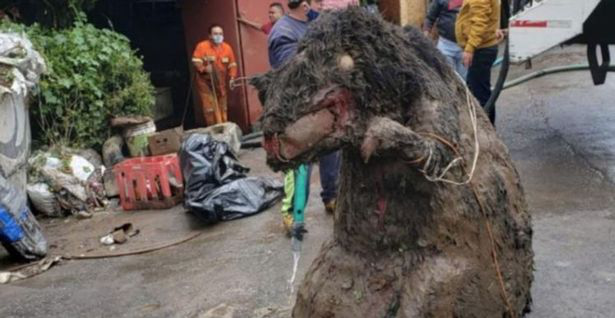 The "giant rat" was part of 22 tons of waste pulled from the city's drainage(排水) system following heavy storms. When workers in Mexico City first saw it, they thought the rat was turning into something big like a dinosaur.
It is said that workers made the unpleasant discovery while cleaning 22 tons of rubbish from Mexico City’s drainage system. Turning a corner, they suddenly came across what is being described as a “giant rat”. But the rat turned out not to be an actual living animal, and in fact it is  a Halloween prop(道具).
The rat had been in a place but washed away during storms. No one knew how it disappeared into a city underground, the Mexico City workers said. Some even said if they had seen it on a street, they would’ve run away in fear. Local reports say it was so real that people were surprised at the site of it after workers pulled it out from the city underground.
Its owner, Evelin López, said her work was washed away years ago during storms in the city, and no one ever helped her get it back. López says she hasn’t decided yet what she would do with the rat.
本时文内容由奇速英语国际教育研究院原创编写，未经书面授权，禁止复制和任何商业用途，版权所有，侵权必究！（作者投稿及时文阅读定制请联系微信：18980471698）