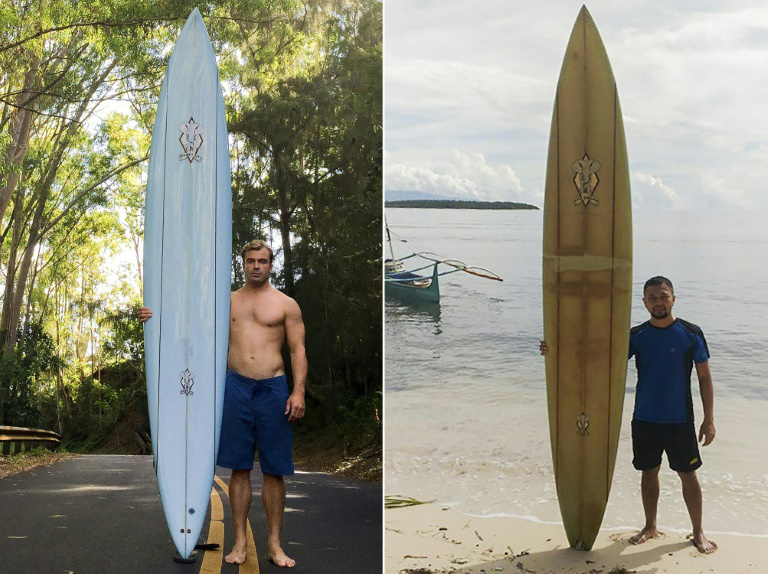 When big wave surfer Doug Falter lost his board in a wipeout in Hawaii, his best hope was for a local fisherman to pick it up. He never imagined it would be found more than 8,000 kilometres away in the southern Philippines.
More than two years after watching his pale blue custom-shaped board disappear in the huge swell of Waimea Bay, Falter was informed through social media that it had been found near the remote island of Sarangani. And the new owner—local primary school teacher and aspiring surfer Giovanne Branzuela—was happy to give it back to him. "When I saw the picture of it, I couldn't believe it. I thought it was a joke almost," Falter, 35, said. "I was certain that the board would never be found again."
Branzuela, who bought the badly weathered surfboard from his neighbour a couple of months ago for 2,000 pesos (US$40), said fishermen had found it floating in the sea in August 2018—six months after Falter lost sight of it. They thought it may have fallen off a passing yacht and sold it to Branzuela's neighbour for a few dollars.
Despite months drifting across the Pacific Ocean, the name of the board's shaper, Hawaii-based Lyle Carlson, was still visible on the surface. Branzuela was curious to look him up on Facebook and sent him a photo of the board. Carlson shared the picture on Instagram, tagging Falter. "It turned out it's a surfboard from Hawaii. I couldn't believe it myself," Branzuela, 38, said. "It's been my dream to learn to surf and ride the big waves here," he added. "For now I can use his surfboard. I told him I will take good care of it." The pair have been chatting on Facebook and Falter plans to visit the small island to retrieve his board in the future.
本时文内容由奇速英语国际教育研究院原创编写，未经书面授权，禁止复制和任何商业用途，版权所有，侵权必究！（作者投稿及时文阅读定制请联系微信：18980471698）
请先登录
最新评论
点击显示
本文翻译请先完成本篇阅读