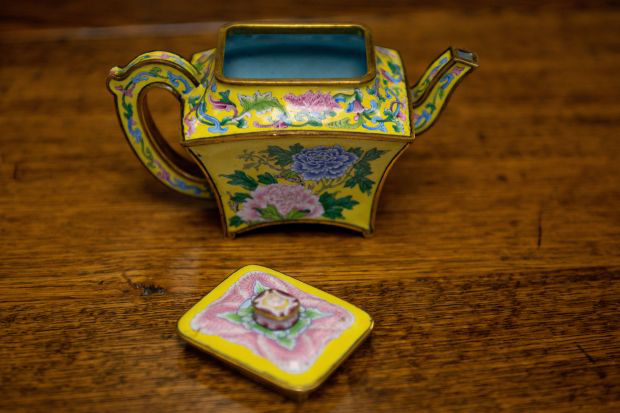 A “teapot” which almost went to a charity shop sold for £468,000 at auction(拍卖). The tiny yellow pot had been put in a box for more than ten years and kept in a loft and then in a garage.
But during the lockdown(禁闭) its owner finally had a clear-out and decided to get it valued. It turned out to be a 250-year-old Chinese wine ewer from the period of the Qianlong Emperor from 1735 to 1796 and may have been handled by the ruler himself. There are only three others in the world — two in Beijing and one in Taiwan.
The 51-year-old owner, from Derbyshire, said, “We’d been thinking of sending everything to a charity shop. But then the lockdown came along. I’d always thought the teapot was special. We believe it was brought back from China by my grandfather, who stayed in the Far East during World War II. My mum used to display it in a cabinet.” He found similar pots online and took it to Hansons auctioneers in Etwall, Derbys.
It attracted people from all over the world and was sold to an unknown buyer in China. Auctioneer Charles Hanson said, “It’s the best lockdown find ever.”
本时文内容由奇速英语国际教育研究院原创编写，未经书面授权，禁止复制和任何商业用途，版权所有，侵权必究！（作者投稿及时文阅读定制请联系微信：18980471698）
请先登录
最新评论
点击显示
本文翻译请先完成本篇阅读