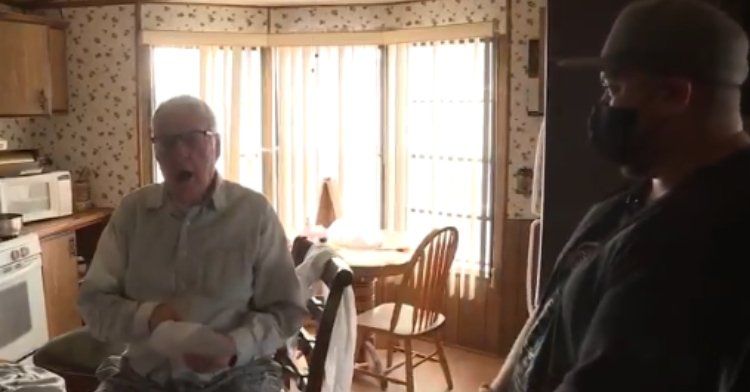 When Carlos Valdez and his wife order from Papa John’s, they aren’t just looking for pizza —they want to see their favorite delivery driver! Derlin Newey started delivering pizza in Roy, Utah, to help pay the bills, seeing as his social security benefits weren’t enough to live on. That’s how the 89-year-old man first met the Valdez family. From the moment they heard him say, “Hello, are you looking for some pizza,” Derlin found his way into their hearts!
Ever since that day, whenever they place an order, they ask for Derlin personally. It didn’t take long for them to begin recording their sweet meetings and share them on TikTok, which is how thousands of other people fell in love with Derlin. Still, his fans couldn’t help but wonder why someone at his age was working so hard—a question the Valdez family was asking themselves too. They spoke with Derlin, and when they found out he works 30 hours a week to make ends meet, they decided to collect donations to make his life easier. They figured anything would help, but they never expected to raise over $12,000!
In September, the couple decided to switch things up by showing up at Derlin’s door with a couple of gifts. First, they surprised him with a cute cartoon shirt of himself holding a pizza box. Then they revealed the surprising act of generosity that brought him to tears! They explained that they had rallied their TikTok community to support him, and while he’s not entirely sure what the platform is, he couldn’t be more grateful.
“How do I ever say thank you? I don’t know what to say,” he told them. “I don’t know what to say, except thank you.” The Valdezs insisted they were just the messengers; it was his fans who made the wonderful gift possible. Plus, the way they see it, they’re just repaying Derlin for his kindness.
本时文内容由奇速英语国际教育研究院原创编写，未经书面授权，禁止复制和任何商业用途，版权所有，侵权必究！（作者投稿及时文阅读定制请联系微信：18980471698）