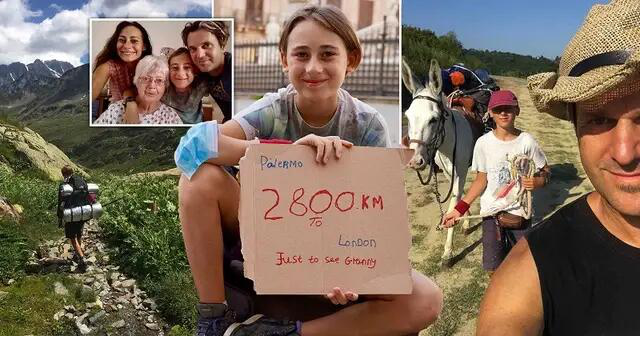 A boy of 11 spent 93 days walking 1,700 miles from Sicily, Italy to London, the UK with his father so he could give his grandmother a special hug. Schoolboy Romeo Cox set off from Palermo on June 20 with his father Phil, 46, on a journey through Italy, Switzerland and France. The pair fought off wild dogs in Rome and even tamed a wild donkey as they made their way back to the UK where they are now self isolating in Hackney.
The hard journey included boat journeys, cycling and a donkey ride but Romeo said it was easy to walk thousands of miles when heading home. The father and son's adventures involved them sleeping in churches, hostels and camping under the stars while some people offered them their homes. Romeo finally reached Trafalgar Square on September 21, 2020, but he’ll have to wait a little longer before he can hug his beloved grandmother Rosemary, 77.
The boy, whose father is English and mother Giovanna Stopponi is Italian, is isolating before he can be reunited with his grandmother who lives in Witney, Oxon. Romeo said, “We got lost a few times. We slept under a wasp(黄蜂) nest which wasn't a good idea, got bloody feet, but we never thought about giving up.”
Romeo, who moved from Hackney, East London, to Palermo last year, have raised £11,000-plus for the charity Refugee Education Across Conflicts Trust (REACT). Speaking of the journey, Romeo added, “As we got closer, I just kept thinking about seeing my Granny, and how excited I was.”
本时文内容由奇速英语国际教育研究院原创编写，未经书面授权，禁止复制和任何商业用途，版权所有，侵权必究！（作者投稿及时文阅读定制请联系微信：18980471698）
请先登录
最新评论
点击显示
本文翻译请先完成本篇阅读