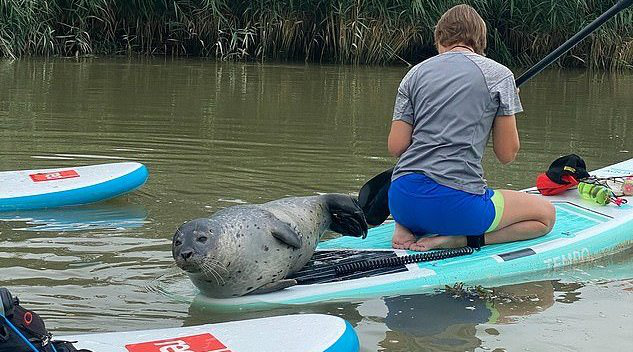 When a wild animal comes near to someone while they’re enjoying time in nature, the typical advice is to avoid interacting with them and respect that humans are visitors in their space. But what if they are very friendly and decide to say hi?
That’s exactly what happened to Daren Ford and Kerrie Rocket when they were hanging out on paddleboards(桨板) in West Sussex, England, one day. They had no idea they were being followed by a curious seal until he plopped himself on a board and joined them for a ride! Apparently, the little guy is well-known in the area where Daren and Kerrie were. In fact, he’s so popular that he’s even been given a name: Gavin.
Since Kerrie and Daren had never come across Gavin before, they were a little scared when he first hopped on Daren’s board. In a video of the meeting, Daren jokingly says, “If he bites my toe, I’m jumping in.” Of course, Gavin wasn’t trying to hurt anyone! He just lounged around with Daren until he decided it was time to try Kerrie’s board instead. Without any hesitation, the cute seal slipped into the water and helped himself to a new seat. And he just kept going! “To our amazement, the seal just started going from one board to another, jumping on and relaxing,” Kerrie said.
None of the humans knew quite what to do until they had some time to process the meeting. “It was an amazing experience, but it never really sank in until we got home and realized how rare this actually happens,” she added.
What a lucky group! We’re so glad they got to see the wonder that is Gavin and ended up sharing it with the world!
本时文内容由奇速英语国际教育研究院原创编写，未经书面授权，禁止复制和任何商业用途，版权所有，侵权必究！（作者投稿及时文阅读定制请联系微信：18980471698）
请先登录
最新评论
点击显示
本文翻译请先完成本篇阅读