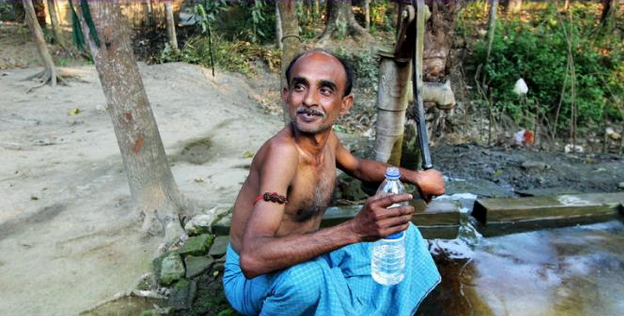 Charity workers have worked with a poor village in eastern India to develop what they say is the world’s cheapest bottle of drinking water -- costing less than one US cent. After years of suffering illnesses from drinking polluted ground water, people of Madusudankati are now receiving clean bottled supplies thanks to a new purification factory.

“I saw a little of hope when I heard that a water purifying factory would be built in our village," local farmer Pralay Mallick said. "I thought that our children would be safe.” Bindeshwar Pathak, founder of Indian charity Sulabh International, said the factory started operating several months ago producing 8,000 litres of water per day. "And the water costs 50 paise (less than one cent) per litre, which makes it the cheapest purified, bottled water in the world," Pathak told AFP. "The village has been supplied the water in 20 litre bottles to households, shops and markets in the area," he said, adding that more than 10,000 people were benefiting from the project. The water is also supplied free to schools.

For people of Madusudankati, close to the border with Bangladesh, the factory has proved a saviour after years of suffering from skin and other diseases blamed on arsenic in ground water pumped from wells. "It sounded to us like escape from poisoning," said community leader Haladhar Sarkar whose people are unsure how the poison found their way into the water.

India has a long history of abuse of water supplies, including from pesticides and industrial pollution, to over-exploitation, especially for irrigation. The new factory, which treats water collected in a deep, man-made pond at the village, has been developed by Sulabh and French NGO 1001Fountains.