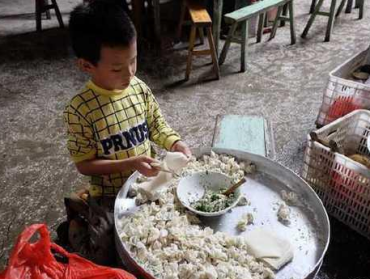 Liu Minghui is an eight-year-old boy. He lives in Ruijin, Jiangxi Province. His story recently catches many people's attention because he makes about 10,000 wontons（馄饨） in a day. Liu's parents work in a different city. Liu and his 6-year-old sister live with their grandparents in the countryside.
During the National Day holiday, Liu sells snacks and wontons with his grandparents. The boy can fold 10,000 wontons in a day. People say he is a good boy. In fact, he often helps his grandparents since he was three years old. Liu studies hard at school. Liu hopes to go to university in the future. Then he can make money to support his family. And he wants to buy beautiful clothes for his younger sister.
本时文内容由奇速英语国际教育研究院原创编写，禁止复制和任何商业用途，版权所有，侵权必究！
请先登录
最新评论
点击显示
本文翻译请先完成本篇阅读