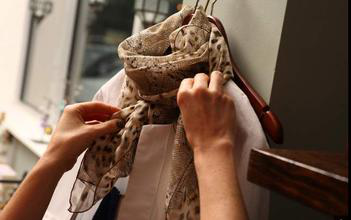 An upmarket chain of US department stores has taken action to stop people buying expensive clothes, wearing them once and then returning them for a refund. About 65 percent of US retailers reported they have been victims of this practice, known as "wardrobing". This form of "return fraud" costs the retail industry an estimated $8.8 billion a year. The store, Bloomingdale's, has started attaching large, black, hard-to-hide tags to the bottom of dresses that cost over $150. The garment cannot be returned if the tag is missing. This means anyone who thinks they can have a "free dress rental" might have to think again. The tag means they would be advertising the fact at their party that they are wardrobing.
Retail analyst Hitha Prabhakar explained how serious wardrobing was, saying, "What people don't realize is that it's an illegal process." Wardrobing has become such a problem that Bloomingdale's has decided to risk annoying and potentially losing customers in an effort to deter it. They have, in effect, let go a little of the sales mantra that "the customer is always right". Some Bloomingdale's customers believe the tags make them feel dishonest, while others think it's a long overdue solution to unscrupulous shoppers. The National Retail Federation said, "It's a delicate balance of loss prevention and good customer service, and the relationship has to be handled with appropriate finesse."
本时文内容由奇速英语国际教育研究院原创编写，禁止复制和任何商业用途，版权所有，侵权必究！
请先登录
最新评论
点击显示
本文翻译请先完成本篇阅读