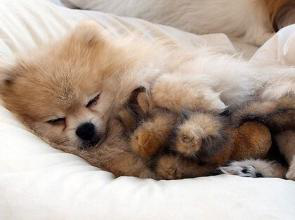 An expert believes she has uncovered the secret of what dogs dream about. Dr Deirdre Barrett, a psychologist at Harvard Medical School, conducted research into dog dreams and concluded that, among other things, dogs dream about their owners. Dr Barrett said canine(犬科的) dreams were comparable to those we have. He said, “Humans dream about the same things they're interested in by day. There's no reason to think animals are any different. Since dogs are generally extremely attached to their human owners, it's likely that your dog is dreaming of your face, your smell and of pleasing or annoying you.” The psychologist even advised pet owners to give their pets happy daytime experiences to make sure they have nice dreams.
Dr Barrett stated that there is no way of knowing for certain what dogs see when they dream. Research isn't even close to disclosing that mystery with human dreams. Her conclusions are based on the fact that canines and other mammals have a sleep cycle that is similar to the human cycle. This includes a period of activity called REM (Rapid Eye Movement), which is the part of the sleep cycle when humans dream. She said, "That certainly makes it the best guess that other mammals are dreaming too." Dr Barrett also explained the reason why dogs move their legs while they are asleep. She said they are probably acting out their dreams, so their legs move in a running motion in their sleep.
本时文内容由奇速英语国际教育研究院原创编写，禁止复制和任何商业用途，版权所有，侵权必究！
请先登录
最新评论
点击显示
本文翻译请先完成本篇阅读